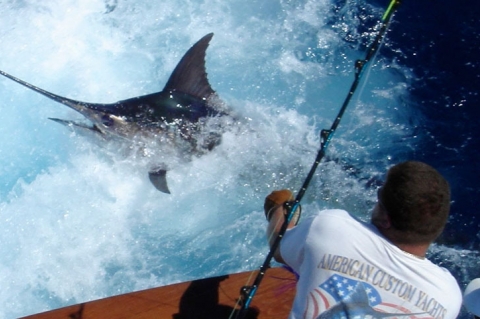 The top sport fishing area is Cabo San Lucas is one of the absolute best places to do some fishing year-round. It is in the southernmost tip of Mexico’s Baja California Peninsula and is one of the top places to find a variety of different fish. When fishing here you don’t have to go out 20-40 miles just to put your line in because there are plenty of nearby spots in Cabo to find marlin, dorado, sails, and wahoo. Cabo is known as, “striped marlin central” because of all the fishermen who travel out there in hopes of catching a lot of marlin on the coast.

Some of the prime fishing banks in the area are Golden Gate and Gordo that are only about 10 miles off the shore. Sport fishermen will come from all around the world to fish in these waters all year long because the water is filled with billfish and tuna as well. In Cabo, they have a strict catch and release policy which has helped the marlin population expand tremendously over the years.

In Australia, sport fishing is popular along the Great Barrier Reef because of all the black marlin. The best months to travel here for sport fishing range from September-December because this is when you will catch the most billfish, dorados, and wahoos as well. Dolphins are also a huge attraction to fishermen in this area. There are many sport fishing charters that are available throughout Australia to show tourist all of the different species of fish that live here.

The coastlines of Costa Rica make for some of the best fishing in the world because each coast is very different. These coastlines create the best environment for sport fishing because along these coasts fishermen will fish for dorado, tuna, wahoo, marlin, roosterfish, snapper, big snook and big tarpon. Specifically, one of the best sport fishing destinations in the Pacific is Bahía de la Herradura because they have a large amount of sailfish, blue marlin and yellowfin tuna.

Located next to the Colombian border and in the middle of the Pacific Ocean, Bahía Piña, Panama is one of the most striking places on this list. In one day of fishing, fishermen have caught sailfish, black and striped marlin, swordfish, bonito, dorado, tuna, skipjack tuna, and shark. Panama has a wide variety of species of fish that are active year round which is a huge attraction to fishermen and others who travel here for this specific reason. Panama is known for its record of a roosterfish that was 90 pounds, but most fish in Panama are catch and release.

Any fisherman looking for top notch blue marlin has definitely heard of Hamilton, Bermuda. This is one of the most popular spots for big blue marlin and no country besides Bermuda has won the one-day, global World Cup Blue Marlin Championship 8 times in the past 27 years of doing it. Bermuda offers some of the best wahoo and yellow tuna so that is also another big attraction for fishermen. The best time to go fishing here is throughout the months of June-August, some popular banks around the area include Argus bank and Challenger bank. Reef fishing is common in this area all year long as people fish for snapper and grouper as well.

Off the Hook Yachts has sport fishing yachts that can meet your requirements. Please contact us if you require any other information.