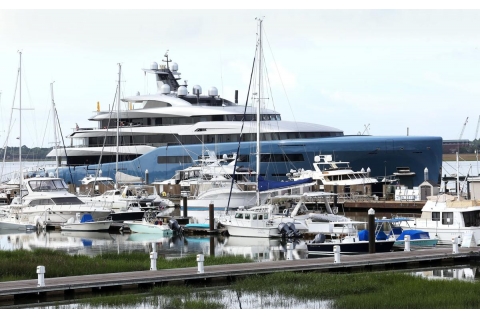 When the 332-foot blue and white super yacht Aviva docked at Charleston City Marina earlier this summer, it drew a lot of attention. The yacht towered over all of the other boats docked at the marina, prompting many questions about the yacht’s owner and what he or she was doing in town for the weekend. The yacht is owned by billionaire British investor Joe Lewis, an 81-year-old who spends most of his time on it because it serves as his “mobile office.” Lewis has an estimated net worth of $5.1 billion and is the fifth richest man in the United Kingdom, according to Forbes magazine; when he is not traveling on this luxury vessel, he is usually at his home in the Bahamas.

The super yacht was launched in January 2017 and was designed by Reymond Langton, a British design studio, with the Aviva being their largest yacht to date. Lewis signed a contract to buy this yacht, and it was delivered within 33 months; it is his fourth superyacht.

Many features distinguish this yacht, including lower engine output, reduced fuel capacity, and a top speed of 20 knots. One of Aviva’s unique features is the hybrid drive system, which allows the yacht to reach speeds of up to 11 knots without using the main engines and only the electric motors. Furthermore, the powerful-looking hull is the result of trial and error on how to ensure superior sea-keeping abilities while reducing drag by 20%. Aviva was named the winner of this year’s World Superyacht Awards, which took place on May 19th in Florence, due to its impressive volume.

Features of the Boat

The main feature of the Aviva, which made it into the top 50 world’s largest yachts, is the indoor, full-sized padel tennis court. With a length of 20 meters and a width of 10 meters, this is the first yacht to ever have an indoor padel tennis court. The court is also 6.65 meters high, creating a massive space that would not fit on any other type of yacht. Lewis primarily uses this boat as an office and a gym; Aviva’s gym is the largest on any yacht. Lewis encourages crew members to play tennis on the court, and when the court is not in use for tennis, the net can be removed and the space used for other purposes.

The indoor court sits along the yacht’s hull and stretches down the bottom of its draft. Outside of the tennis court, there is a small lounging and viewing area up a series of stairs. Another main attraction on the yacht is Lewis’ $1 billion art collection that reportedly sails around the world on the yacht with him. His private art collection is one of the world’s largest and includes artwork from many famous artists. The Aviva is definitely one of the biggest boats to visit Charleston but not the biggest one in history. When the mega dock opened at the marina in 2003, a 454-foot Rising Sun came to dock there for a few days. Super yachts are some of the most luxurious vessels in the world so make sure you check out this amazing Aviva!