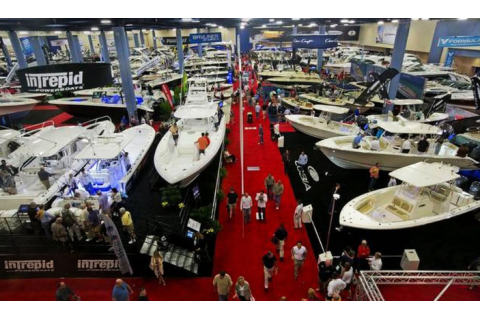 Boating enthusiasts flocked to southern Florida on Saturday, February 14th, 2015, for the Miami International Boat Show. The annual show generates a lot of buzz for marine culture and features everything from small inflatables to sleek yachts. Miami is the most desirable location for the boat show due to its location on the Intracoastal Waterway and Biscayne Bay. As well as its proximity to the Florida Keys. This year’s Miami International Boat Show featured some of the most anticipated new models in the show’s history. Let’s take a look at some of the highlights from this year’s show.

We’ve seen some massive center consoles introduced at the boast show in recent years, but nothing has come close to the 50-foot mark, HydraSports Custom 53′ Suenos. The world’s largest outboard-powered center console is built with Advanced Combat Craft Construction. This boat is based on two million dollars in US Navy research.

This massive center console has a 52’11 LOA and a 13′ beam. It’s powered by four Yamaha F350 four-strokes, four Seven Marine 557 outboards, and a ferocious quintuplet of Mercury 350 Verado horses. Although the price is steep at $949,000, that’s to be expected for a boat whose official maximum horsepower rating is “none.”

The Greenline 48′, dubbed “The Prius of the Seas,” is the world’s first hybrid yacht powered by natural gas. This 48-foot yacht uses solar energy to recharge its batteries and incorporates eco-friendly and fuel-efficient features. It can run on either electricity or conventional fuel (something the captain must manually switch between). Therefore, costing close to $1.1 million and is loaded with high-end electronics and eco-friendly features. A new era of boating is upon us, with solar power as the most recent source of fuel for your vessel.

Garmin unveiled their latest navigation system, GPSMAP 640, which was eagerly displayed this year. The new model includes tides and currents, depth contours, port plans, marine services, and more. Garmin worked hard to make it easy for users to switch between marine and automotive modes. Boaters will have no problems using the GPSMAP 640 on land or water.

The high-resolution touch screen display and user-friendly interface instill trust and allow the user to explore with minimal effort. The GPSMAP 640 navigation system from Garmin is the company’s best yet. It’s powerful and portable enough to help you find your way on land or at sea.

The announcement of Seven Marine’s 627 outboard engine was arguably one of the most anticipated items in the performance marine engine world. Horsepower reigns supreme with this vessel. The 627 is powered by an all-aluminum GM LSA 6.2L supercharged and fuel-injected V8, whose power was increased by developing a High-Turbulence Combustion Chamber.

Each chamber produces a distinct combustion event, increasing engine horsepower and delivering the high torque required for top-tier performance on large boats. The 627 has a top speed of 5,500 rpm and a fuel requirement of 89 octanes plus 10% ethanol. Seven Marine continues to deliver horsepower, torque, and best-in-class fuel efficiency with the 627-HP Outboard.

Off the Hook Yacht Sales has a proven process for both dealers and private sellers to liquidate their used boats and trades immediately! We have been the industry leader in marine wholesale since 2012. If you are looking for a fast, fair, and competitive number on your boat please click here! Also, don’t hesitate to talk to any of our representatives at our booth to learn more about our easy trade process.