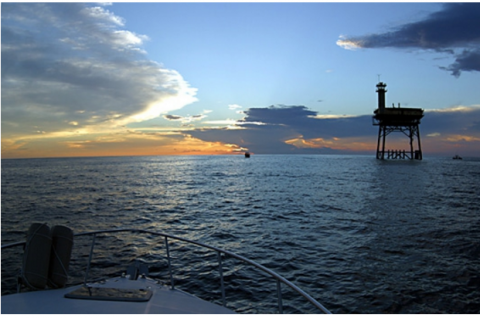 The “Graveyard of the Atlantic” stretches from Wilmington to the Outer Banks and has seen some of history’s most terrifying shipwrecks. The North Carolina coast is an excellent diving location for those who enjoy scuba diving. This is where warm water from the Gulf Stream meets cold water from the north, resulting in dangerous weather. It is also the location where Edward Teach, alias Blackbeard, sailed the Queen Anne’s Revenge. Here are five impressive east coast dive spots worth visiting in the Atlantic Graveyard!

The Frying Pan Shoals form the southern boundary of the Atlantic’s graveyard. The Frying Pan Tower was constructed in the 1960s and restored in 2010. When it was first built, the tower served as a lighthouse to warn ships of the reef below. The tower is now open to anglers and divers looking for a one-of-a-kind getaway. Spiny lobsters, mahi-mahi, wahoo, and other species can be found beneath the surface. During the summer, temperatures typically remain in the mid-60s. Because there can be strong currents this far out, diving the Frying Pan Shoals is only recommended for experienced divers. For those interested in spearfishing, it is also a premier location.

The Hyde, a 215-foot Army Corps dredge from the Vietnam War, can be found 18 miles off the coast of Wrightsville Beach. This is an excellent dive site for beginners because it is close to shore, has excellent visibility, and has minimal currents. There is usually 30-50 feet of visibility, but some days it is top to bottom. Water temperatures in the summer are frequently in the low 80s. Sharks, rays, eels, and barracudas can all be found in Hyde. Soft corals and colorful sponges are among the plant life found near the wreck. Before diving into this wreck, get used to sharks!

The 411-foot Liberty Ship can be found four miles south of the Beaufort Inlet, where the Queen Anne’s Revenge was discovered in 1996. Theodore Parker was the actual name of this ship, and it was sunk in 1974 as an artificial reef after colliding with a mine on its way from England to New York during WWII. It was repaired before sinking, and you can now see it in its entirety by diving down 60 feet. This is a beginner dive, but use caution because visibility can be as low as 15 feet.

Papoose was torpedoed in 1942 en route to Rhode Island to pick up fuel. It rests upside down 36 miles off the coast of Cape Lookout. Here in the middle of the Graveyard of the Atlantic, you can see manta rays, jewfish, and tiger sharks. The ship is 90ft below water, so this is a dive only for the experienced. Water temperatures can reach the high 70s because of the warm, clear Gulf Stream waters that funnel up from the south.

The Aeolus is a testament to nature’s power in the Atlantic Graveyard. This 400-foot cable repair ship was intentionally sunk as an artificial reef in 1988. It was buried in 20 feet of sand until 1996, when Hurricane Fran ripped it to shreds underwater. The boat is now divided into three large sections, with numerous pieces strewn about it. Sharks, amberjacks, barracudas, and schools of small tropical fish call it home. Despite the fact that there is frequently up to 70ft of visibility, it is described as a “dark” wreck because divers understand that the haunting threat of a pirate attack or German U-boat torpedo is nothing compared to the vicious wrath of a Hurricane.

Only certified SCUBA divers should attempt these dives. For those who live in the Wilmington and Wrightsville Beach areas, try heading over to Aquatic Safaris or Scuba Now to being your journey! These dives will open your eyes to the reasons why the coast of North Carolina is named the Graveyard of the Atlantic.